Ricardo Arjona will be returning to Dominican Republic bringing his “Metamorfosis World Tour 2012” to the Estadio Quisqueyano Sunday September 8, 2012 at 8PM. Ticket prices start at $1000rdp. 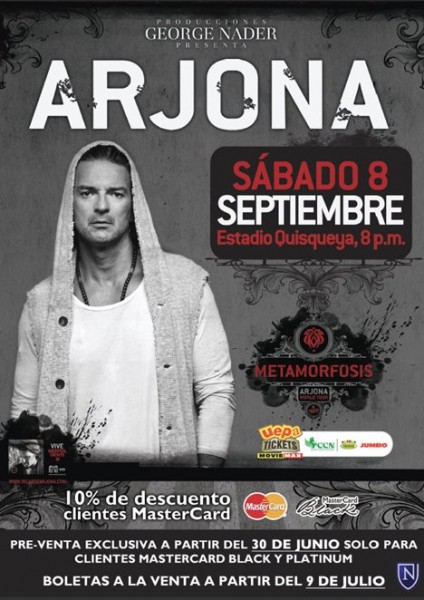 George Nader Jr. said they expect about 25,000 people to crowd into the stadium for this spectacular. Ricardo Arjona took control of the designing, concept and writing the script for his tour “Metamorphosis 2012”. They will be bringing with them more than 45 tons of cargo including the scenery and more than 150 lights. He is traveling with a team of 50 people as part of their staff. Arjona has taken his tour to El Salvador, Guatemala, Uruguay, Argentina and Chile. They will also be heading to Peru, Ecuador and Venezuela.

The artists full name is Edgar Ricardo Arjona Morales. He is a Guatemalan singer-songwriter, former basketball player and school teacher.