Hard Rock Café presents Skyblu of LMFAO and The Party Rock Dance Crew will be bringing their show “Who Came to Party!?” to the Dominican Republic. They will be at the La Marina Sans Souci in Santo Domingo on September 15, 2012 at 10PM. LMFAO will perform the next day at Lifestyle Holidays Vacation Resort in Cofresi, Puerto Plata. 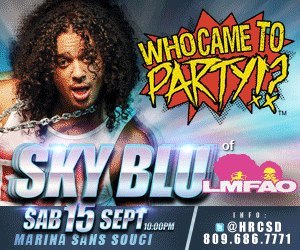 The Electro-pop Rock band is known for their popular songs including “I’m in Miami Beach”, “Party Rock Athem”, “Champagne Showers”, “Sexy and I Know It” and “Sorry for Party Rocking”

LMFAO was formed in Los Angeles, California, by Skyblu and his Uncle Redfoo, who initiated this project with the intention of mocking the prevailing music scene in 2006. They performed their official apology anthem “Sorry For Party Rocking” on American Idol. They also were nominated for the 2012 Billboard Music Awards being a finalist in 17 categories including Top Hot 100 Artist, Top Duo/Group and Top Pop Artist. LMFAO’s ”Party Rock Anthem” has surpassed 13.5 million units in total sales worldwide! “Party Rock Anthem” was the #2 top selling song of 2011 on iTunes in the U.S.