The announcement has been made! The Festival Presidente de Música Latina 2014 / Presidente Latin Music Festival 2014 has announced the list of artists that will visit the stage for this years much anticipated festival. This years festival will be celebrated for 3 fun and music filled days on October 3,4 and 5, 2014 at the Estadio Olímpico Felix Sánchez, Santo Domingo, Dominican Republic. 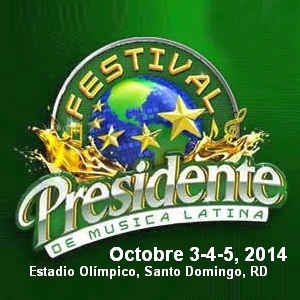 The President of the Cervecería Nacional Dominicana, Franklin León, says that this year will be the best in the history of the music festival since it first brought music to the stage in 1995.

Ok..here we go with this years amazing line-up:

The spectacular is brought to Dominican Republic by the largest entertainment company in Latin America, Grupo CIE. The Festival is sponsored by the Ministerio de Turismo (MITUR) and Claro.

Ticket prices start at RD$900 and can be purchased at Uepa Tickets and at Centro Cuesta Nacional, More information at www.presidente.com.do.