A 5.3 Terremoto hit us today in Dominican Republic at 5:36 in the morning on January 5, 2012. Most people were asleep when the earth and peoples beds shook early this morning. Some ignored it while others were up on the computer checking what happened and others went to the street.

The depth of the temblor de tierra was quite shallow at 10 kilometers.

You can also get lots of links to Earthquake information about quakes in DR, and more.

The movement of the quake was a lateral movement instead of the rolling horizontal movement that is usually noted in quakes.

There will be no tsunamis.

There have not yet been any reports of lives being lost.

There are many reports of the earth’s movement being felt at different levels of intensity throughout the country. To see a map of the different provinces for more of an idea where this happened.

San José de Ocoa is one of the areas hardest hit but the reports say no one was hurt. The temblor de tierra caused small landslides in the street Cruce de Ocoa and they are in the process of removing debris from the road now.

The newspaper Ocoa En Red reported at 9AM this morning that aftershocks were felt.

They say that people in the town are afraid and have been in the park and the streets since it happened. There is even people praying and holding church services. 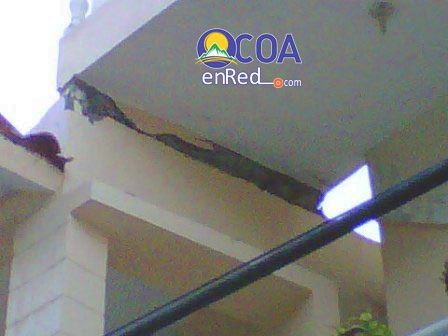 Picture – Baron Hotel one or the more affected buildings in Ocoa.
More pictures of the damage in Ocoa.

I will report more information as I learn it.