The Earthquake that struck in Dominican Republic very close to the towns of San Jose de Ocoa (click the link for some information about Ocoa and pictures taken before the Quake) and Bani had caused some damage and we are seeing after shocks.

The damage is not that severe and no deaths have been reported, thank God for this. But the different damage reports are still trickling in and after shocks are still happening.

Three schools have reported damages to their structures. These structural cracks will not cause a problem for the school children when school resumes after the holidays are over. They are repairing the cracks so all will be safe for the kids return to school.

There is news also reported that there are some cracks in the roads and some landslides which are causing some travel problems. The raods are still passable but people have to take turns using the one open lane to get past the problem areas. 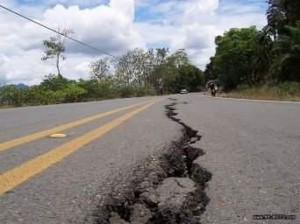 The road between Bani and Ocoa.(A friend sent me this picture. I do not know where it came from. if there are any problems with this picture please email me credit information and I will be happy to post it.)

It is also believed that this terremoto was the end of the world. Even though the earthquake that happened about 50 years ago was stronger this one caused much fear. Now there are more tall buildings and more people. The buildings that were 2 stories or more suffered the most damage.

We had another Temblor del Terra at 6:02PM . It registered 4.6 in the Richter Scale/ Escala de Ritcher, and was at a depth of 37.7 miles (60.7 km ).
http://earthquake.usgs.gov/earthquakes/recenteqsww/Quakes/usc0007gps.php

The The Emergency Operation Center/ Centro de Operaciones de Emergencias (COE) says that people in the area of the quakes need to keep vigilant as there will probably be more shaking coming.

I will post again in the morning unless something extraordinary happens, which I hope and pray nothing happens. I hope the earth decides to settle down and give all a rest after a very frightening and difficult day. Even though there was not much damage and people are all fine. It is very frightening when you are woken by shaking. If you ever were in an Earthquake you will know that the shaking is so unreal. After, even if you know you are safe, you still have a fear inside. I hope all those who are afraid can rest well this night.