The Festival Marisco Ripiao is held to celebrate the historical relevance of Sanchez, the local cuisine and to celebrate the musical culture of this region, Perico Ripiao, and to being attention to the conservation of marine life of Samana Bay. 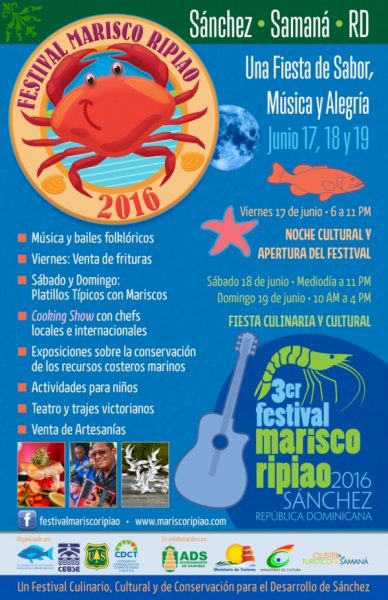 The focus is to increase knowledge about Sanchez and it’s role in the history, culture and economy of the country. Also to help increase awareness for the conservation of natural resources and adaptation to climate change in the area including the Parque Nacional Manglares del Bajo Yuna / Mangroves National Park and Parque Nacional Los Haitises / Los Haitises National Park.
Talks / mini-workshops on local culture and history and conservation of natural resources

Some of the fun, entertaining and educational events include:
*“Cooking show” with known local and international chefs
*Ballet Folklorico
*Music Perico Ripiao
*Sale of traditional food, seafood, breads, sweets
*Sale of local crafts
*Activitirs for children
*Exhibitions on the conservation of natural resources and climate change
*Exhibitions on local culture and tourism in the Samana peninsula

For more information visit their web site
www.mariscoripiao.com
or the Facebook page
www.facebook.com/festivalmariscoripiao

A little history…
“Sánchez was founded in 1886 and soon became a center of commerce for the Dominican Republic, as it was a maritime town with a very active port. It was the home of a train that connected the town directly to La Vega and the interior of the country. It was also home to The Royal Bank of Canada, the first bank in the country. The town is known for its picturesque Victorian houses, many of which still exist today. Sánchez is the primary entry way for excursions to the Los Haitises National Park and the mangrove laden tropical rivers of Barracote, Yuna and Colorado.”