The international pop superstar Miley Cyrus will be in Dominican Republic for the first time bring her “Bangerz Tour” to our island.

I will add any new information I find when I see it. 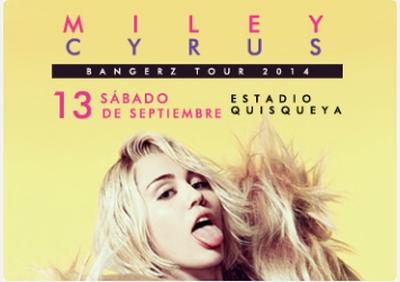 This concert will be at the Estadio Quisqueya, Santo Domingo on Saturday September 13, 2014. Cyrus will be singing and performing in her own special way her popular music and the songs from the RCA Records album Bangerz. This album debuted at #1 on both the Billboard Chart and the digital sales records where it was #1 on iTunes in over 70 countries simultaneously.

Ticket prices start at RD$1,200 and can be purchased in advance on line at Ticket Express. Tickets also available at La Sirena, Super Pola y SdConcerts.