AURA will be having a big album release concert on Wednesday, August 13, 2014 at Hard Rock Cafe, Blue Mall starting at 7PM. This is the newest addition to the Hard Rock Cafes located in Dominican Republic. It is on the 4th floor in the Blue Mall, Santo Domingo on Winston Churchill and Gustavo Mejia Ricart. 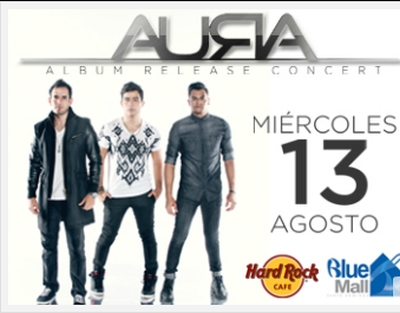 Aura, the pop music group with Javier Grullón, Jose Julio “JJ” Sanchez and Manny Cruz, is celebrating the release of their first album with a big concert that claims to have energy and romance. The three idols of Dominican youth will be performing all their hits and new songs in a sensational show.

Tickets can be purchased on line at Ticket Express with prices starting at RD$700.