Verano Presidente 2012 presents Wisin y Yandel and Prince Royce with their Los Líderes concert to promote Wisin y Yandels newest album. The urban music performers from Puerto Rican newest album has Reggaeton and dance rhythms from around the world. They will also be singing their most popular hits.

Prince Royce, a Dominican from the Bronx, NY, is achieving great success in the genre of bachata, both locally and internationally. He will be singing many songs from his newest album “Phase II” with his most popular songs “Las cosas pequeñas” y “Incondicional”. 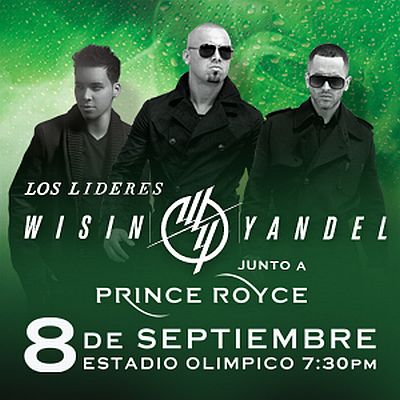 This, one of the top concerts of the year, will be at the Estadio Olímpico Félix Sánchez (located on Avenida John F. Kennedy and Máximo Gómez) September 8, 2012 at 7:30.

Tickets on sale at La Sirena, Supermercados Pola Ticket prices start at $600 RDP per person. They can also be purchased at Ticket Express. Produced by SD Concerts