I will be adding more links and information here as needed. Please check back.
Information Posted 11-9-2012

There is much unrest among Dominicans since the new tax reform bill was passed. It is getting very ugly. If you do not want involved in the protests please watch where you are and stay away from any protesting groups. Bystanders, protesters and police are all getting injured.

Please note The protest location in Santo Domingo has been changed because there are not the facilities to accommodate all the people. Also the Plaza de la Bandera is all marble and can become very hot. b. It will now be in Parque Independencia in Colonial Zone. 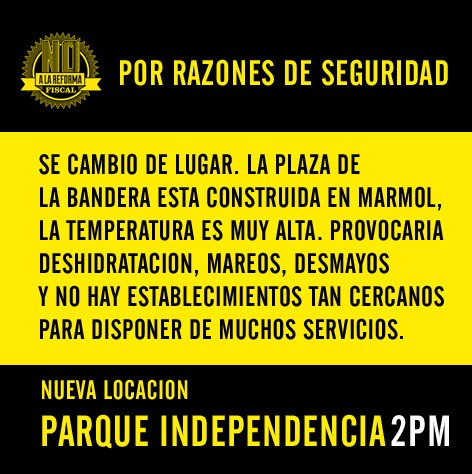 There is a large scale protest planned “Contra Reforma Fiscal” Sunday November 11, 2012 at the Plaza de la Bandera in Santo Domingo. Note above that the location has been changed. 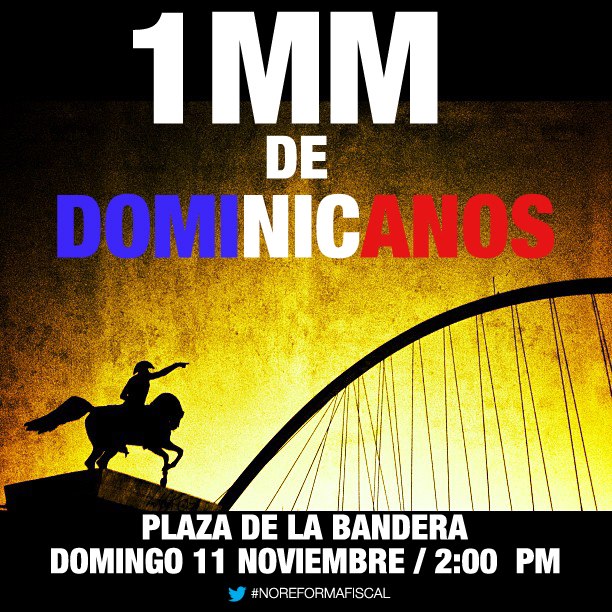 The tax reform bill in short –

*Increase of the sales tax (ITBIS) from 16% to 18% on most items. Food items that had not been taxed, including sugar and coffee, will now be subject to tax.

*Require Internet purchases under US$200 to be subject to Customs procedures (said to be in violation of the DR-CAFTA trade agreement).

*Increase of RD$2 per gallon of fuel to fund road infrastructure.

*A CO2 emissions tax for cargo trucks and public transport for more than 16 passengers.

“Various social and political organizations today protested throughout the country and the capital thousands marched today to the Congress venue, where began a vigil against the Government tax reform proposal.” 8 November, 2012
http://www.proyectoambulante.org/?p=27897

—————
Santo Domingo, 9 nov (PL) different sectors and organizations of Dominican society maintained today his actions of protest against Government fiscal reform, point-to-point entered into force as law after its approval in Congress.

This time, the project had the support of 103 lawmakers and received rejection of 68, while five not exercised the vote, according to the information disclosed about suffrage.

Yesterday the first death of a demonstrator against the reform occurred when the 21 year old student of medicine from the Autonomous University of Santo Domingo (UASD), Willy (William) Warden Florián Ramirez from San Juan de la Maguana, was shot in the thorax. He died after being shot near the corner between Ave. Jose Contreras and Ave. Alma Mater. A lieutenant colonel and 18 agents from the contingent sent to the UASD are under arrest pending an investigation.

National police agents arrived at the UASD to control the situation with gunfire from automatic weapons and tear gas canisters.

There are many images, some very disturbing. Pictures the protests and the medical student, Alfredo William Florián, that was killed.

After a mandate characterized by rampant estate spending, politicians getting lavish houses and cars, pensions of about USD$12,500 a month for top party officials for four years of work while still having a thousand of dollars government job in another position (Minimum wage is a little over $200), crazy salary hikes, blatant clientelism and tax evasion, millions and millions in government money to fund the official party’s presidential campaign, and many other things, the party ends and the people have to pay the bill.
The congress has approved a fiscal reform that basically screws the people, raising taxes in general and taxing basic food items, as well as small internet purchases that were one of the few ways to circumvent the abusive local retailers (You’d have to pay double the online price + shipping for basically anything).
This problem isn’t solved by taxing, it’s solved by making those responsible pay. Not a single politician has been put in jail or even tried, even those for whom there is incontrovertible evidence of ghastly instances of fraud and corruption. Today the reform was approved by a government controlled Congress in just 19 minutes with no room for debates. Dissenting congressmen were silenced and not given the opportunity to speak. A student was killed during riots in the state university and it’s believed to be the first of several deaths in the near future.
All because a central figure named Leonel Fernandez, until 84 days ago the President of 12 years, personally controls all of the State Powers: Government, Congress and Supreme Court. He also controls most of the media, so even the fourth state is under his power. It’s ironic since countries like Canada gave him an award as Statesman of the Year and named him “the Oracle of Santo Domingo” all because he let a canadian-based gold mining corporation named Barrick started raping the land and destroying the environment of the island. The people have had enough and we need your help, Reddit. Let us help make some noise so the eyes of the world get turned on our small country.

Today there is to be a protest in front of the police headquarters today demanding justice for the student what was murdered.