I was searching the Internet for some interesting information about Dominican Republic to write about. I found this historical book published in 1936. It talks about all the good things Trujillo accomplished in the beginning of his presidency. It shows his arrogance and many little points of propaganda he planted to make it seem that he was so wonderful. All the good he did with all the bad hidden from view to the outside. The video is an interview towards the end of his reign. You can see how peoples views of him had changed. All very interesting to note. These are located in The Internet Archives. 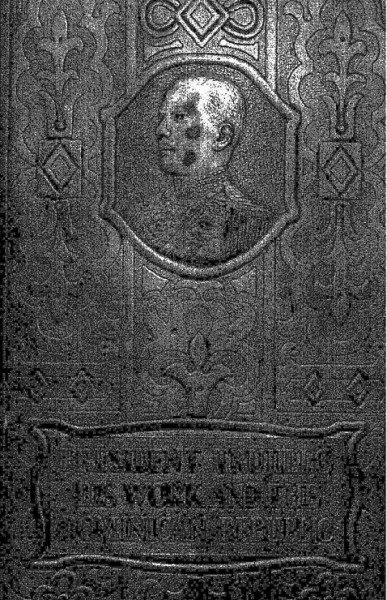 PRESIDENT TRUJILLO: HIS WORK AND THE DOMINICAN REPUBLIC (1936)
BY LAWRENCE DE BESAULT (Besault has published at least 17 different books and publications in 3 different languages)

“This book is dedicated to all those that love liberty, order, peace, progress and work.”

You can download this book or read it on line. There is also a Kindle edition
PRESIDENT TRUJILLO: HIS WORK AND THE DOMINICAN REPUBLIC (1936)
BY LAWRENCE DE BESAULT

This is a 40 minute taped interview with Trujillo. It is very interesting to watch. His look is so intense and he keeps looking away as if he is hiding something. He has his hair died to make him look younger.

Interview with General Rafael Trujillo 1961 – National Security Council. Central Intelligence Agency. (09/18/1947 – 12/04/1981). – This film covers an interview with General Rafael Trujillo of the Dominican Republic in which he responded to questions concerning his country’s relationship with Cuba, and the use of an intelligence service. He also answered questions on the Organization of American States (OAS) and U.S. economic sanctions.

This is a newsreel from USA World News that has a short clip “President Trujillo is inaugurated in Trujillo City, Dominican Republic, and reviews a parade” The Trujillo part of the video starts at time 6:04 in the video.

A little more information and history about Trujillo with links to other information at www.colonialzone-dr.com