The newest addition to entertainment in the Colonial Zone, The Colonial Gate 4D Cinema.

This state of the art cinema experience is the first 4D cinema in the Caribbean. It will be a multi-sensual experience claiming
*The Best 3-D Resolution Images
*Last Generation 4-D Seats
*Leg and Back Ticklers
*Water Sprays
*Wind
*Lighting
*Smells
*Smoke

The cinema was funded by the private sector at a cost of RD$100 million pesos. The President of the Board, Cristóbal Justiniano, stated that the 4-D Cinema will be focused on the location, the 4D platform, the unique audiovisual system and the world of animation.

There are 2 theaters with a capacity of seating 50 people in each room. Tickets for most shows will cost RD$400 for adults and RD$265 for children. The theaters regular hours are from 8PM to 11PM showing Independent films (we will announce the movies on the news blog Events and Happenings section).There is also a snack bar selling the traditional movie theater treats, popcorn, soda and candy.

Their first presentation will be reliving an important historical event in Santo Domingo entitled “La Batalla de Santo Domingo¨ / “The Battle of Santo Domingo”. This film will be shown on Friday, May 15, 2015. The tickets will cost US$8 and for this special presentation the show starts every 20 minutes from 9 to 6PM. 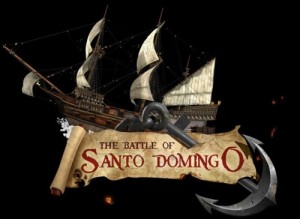 When you see this presentation you will not be just watching a movie, you will be experiencing the event as if you were present for the battle that happened in 1586 when Sir Francis Drake invaded the ports of the Santo Domingo Colony. You will feel the wind blowing and the water splashing from the Caribbean Sea as the ships enter the port. You will feel the earth rumbling as the cannon fire starts as the battle continues. You will feel all the events as if you were right there in the battle with the astounding sound effects and jaw dropping special effects as you experience this one of a kind theater. 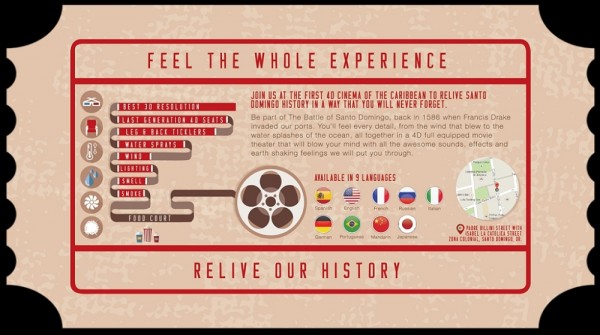 In general, the hours are daily from 10AM to 11PM and closed on Mondays.

Shows, times and prices can vary. Shows will be posted in the Happenings In The Zone section of the Colonial Zone News Blog so keep checking.

What is 4-D technology you might ask?
It is a 3 dimensional film with physical effects that that are synchronized with the film bringing it to a fourth dimension. The first film produced in 4-D was “The Sensorium” in 1984 for 6 Flags Theme Park and many other theme parks including Disney have made films using the 4-D experience. The first 4D theater in the United States opened June 2014 in Los Angeles

You can read the review on the blog The Life and Times of the Dominican Gringa – My Visit To The Colonial Gate 4D Cinema.