On July 30, 2013 a green turtle named Jaira was first detected nesting on the beach called Güibia in Santo Domingo. The Ministry of Environment/ Ministerio de Medio Ambiente placed guards at the site to protect the four turtle nests.

This video is when the mommy turtle, Jaira, came ashore at Guibia and laid her eggs.

The Green Turtle (Chelonia mydas) is an endangered species and is protected in most countries of the world. It is illegal to collect, harm or kill these turtles. Most countries have laws protecting this almost extinct creature.

On September 28, 60 days later, the first turtles emerge from their eggs.

The first hatchlings left the nest around 2AM when 83 tiny turtles began their race for survival.

This video documents the last three tiny baby green turtles to leave the nest and head for their lives in the sea.

Read the complete article in Spanish and see some of the pictures of the baby Green Turtles. http://www.diariolibre.com/sociedad/2013/09/29/i404289_nacen-las-primeras-tortugas-jaira-gaibia.html

The video and pictures are amazing. But watching the turtle crawling back to the sea after she laid her eggs. Crossing the trash laying on the beach. She stops in the middle of the garbage and seems to sigh. Like she is disappointed with all the waste on the beach. 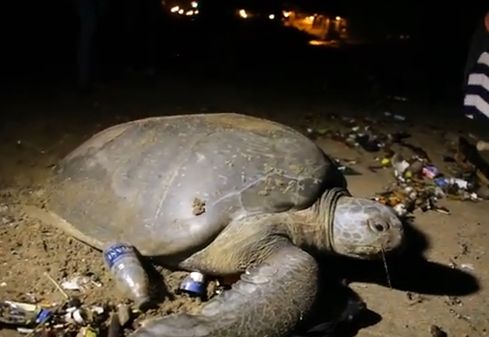