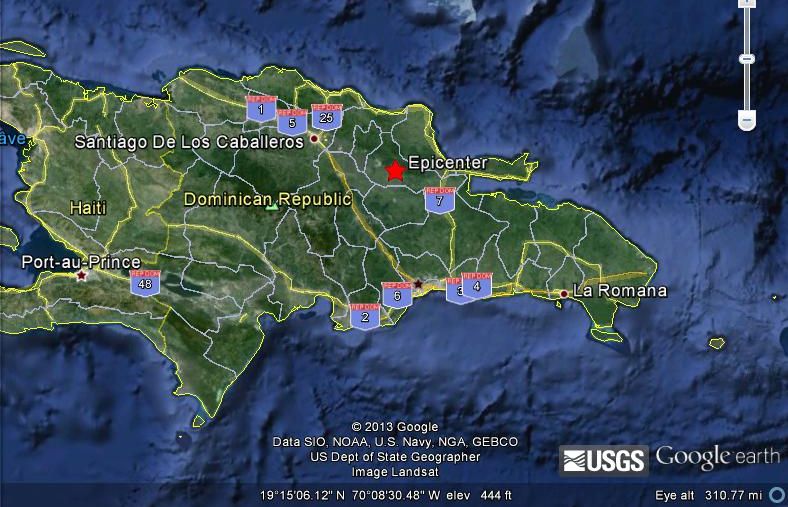 Diario Libre says reports from San Francisco de Macoris indicate that the buildings were vacated and dozens of people took to the streets.
In the capital the quake was very strong, which caused tall buildings residents took to the streets for protection.
The quake was felt in several towns of the Cibao, as La Vega, Samaná, San Francisco de Macoris, Santiago.
http://www.diariolibre.com/noticias_det.php?id=392923&l=1

Many links and information about Earthquakes / los Terremotos/ Temblor de Tierra and safety procedures with links to many informative web sites.
http://www.colonialzone-dr.com/weather-earthquake.html

Some interesting reports. I cannot verify them but here they go:
*San Francisco de Macoris – Lobby of the local university cracked. Windows in some malls broke.
*Nagua – Electrical power and local telephone traffic was down
*The earthquake was being felt stronger in Santo Domingo than in Sosua
Did you feel it?

The aftershocks occurred have felt part of the Northeast, where the earthquake occurred in Salcedo, San Francisco de Macoris, Pimentel, Fantino and elsewhere in the region.

El Caribe report at 11:19AM
Also, the Seismological Institute of the Autonomous University of Santo Domingo reported that another earthquake occurred near Bani, Peravia province.

I came across this great little item to detect vibrations from a quake on Amazon.