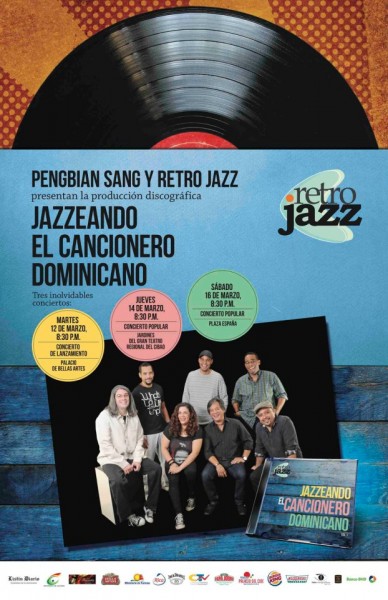 The Retro Jazz musicians are: Federico Méndez – guitar, Remi Taveras – drums, Edgar Molina – percussion, Álvaro Denzey – keyboards and Jesús Abréu – saxophone, Laura Rivera – vocals and of course Pengbian Sang make up the group plus guest artists. They are giving a new jazzy life to these songs they are putting in this album.

The first concert is on Tuesday, March 12, at 8:30 pm at the Sala Máximo Avilés Blonda in the Palacio de Bellas Artes in Santo Domingo. Ticket prices are $500 and $800 RDPesos.

The second concert is in Santiago de Los Caballeros on Thursday, March 14, 2013 at 8:30 pm in the Gardens of the Teatro Regional Cibao. Entry is free.

Then the last concert will be in Santo Domingo on Saturday, March 16, 2013 at 8:30 pm in the Colonial Zone in Plaza España. This concert is free.