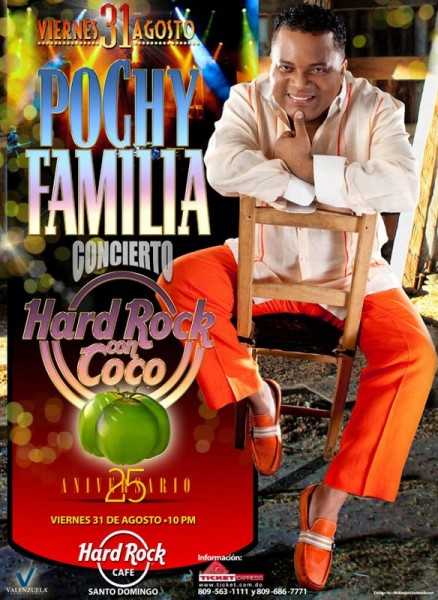 A little Pochy Family history:
The Pochy Family is a merengue legend since 1988 when they formed the group. Led by Alfonso ¨Pochi¨ Vásquez. Many of the groups past members have become famous themselves including Kinito Méndez and Bobby Rafael. They are typical known for their merengue music but they also have made themselves known by playing bachata and salsa. They have kept up with the new music trends by adding some merenhouse to their repertoire.

Some of their most recognized songs include ¨La faldita¨, ¨La flaca¨, ¨El hombre llego parao´¨, ¨Salsa con coco¨and ¨El cacu¨. Their newest additions include the songs ¨Aplatanao¨ and ¨Ping Pong¨. They add their catch phrase ¨Pero con coco!¨/ But with coconut! to many of their songs.

Vasquez was honored with his own star on the sidewalk in the Celia Cruz Park in Union City, New Jersey by the Cuban Council of New
Jersey.

Tickets can be purchased at Ticket Express. Tickets in advance $1000 RDP and at the door $1500 RDP