For the fifth time a new mural will be painted on the obelisk / El obelisco (also known as El Obelisco Macho) located on Avenida George Washington (also known as the Malecon) not far from Colonial Zone in Santo Domingo. As you pass by now the entire monument is surrounded in scaffolding. It should be complete in a few weeks. 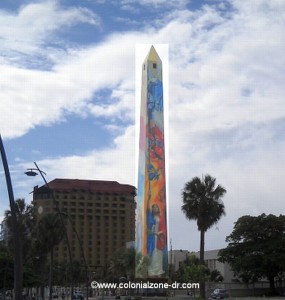 The new project will honor the life of the Mirabal sisters / Hermanas Mirabal and the struggles of Dominican women. Many years ago the obelisk was painted with the Mirabal sitsers as well but they changed it. The artist, Dustin Muñoz, designed this new work called “Allegory of liberty” / “Alegoría a la libertad”.

José Pelletier is in charge of creating this new work of art along with painters Cándido Bidó, Elsa Núñez y Amaya Salazar. Each artist gets to paint a side of the obelisk. Each side will have aspects of the Dominican flag and symbols of patriotism and faith. It will also present the contributions of women to the nation through the arts, culture, economy and labor.

A little history – This 137 foot tall monument was built by Trujillo in 1935 to commemorate the renaming of the capital city Santo Domingo to Ciudad Trujillo. To see a picture of the obelisk as it was painted in 1997 with the Mirabal Sisters mural. As soon as I get to take a picture of the new monument I will post it. *note – all links open is new windows.