SD Concerts brings the Mexican group Maná to Santo Domingo. Sponsored by Corona Beer Mana will return for a much anticipated concert after a four year absence in Dominican Republic. The Latin Pop Rock band will be promoting their new disc “Drama y Luz”. 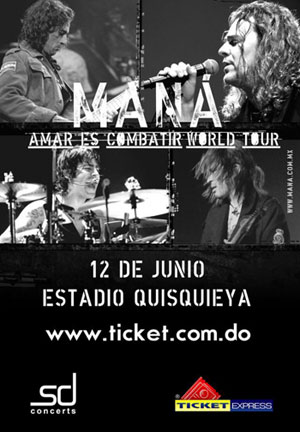 The show is on Wednesday March 14/ miércoles 14 de marzo 2012 at the Estadio Quisqueya of Santo Domingo. The Quisqueya Stadium is on Avenida Tiradentes and Avenida San Martín, in Ensanche La Fe, Santo Domingo, Dominican Republic
www.estadioquisqueya.com.do

This is an official video of their song “Amor Clandestino”

For all things Maná visit their official web site.