Music in the streets!!

(Scroll down for the schedule)

On Saturday June 23, 2012 in the Colonial Zone, Santo Domingo there is a giant street party! Each year we participate in the French based Fiesta de la Música. 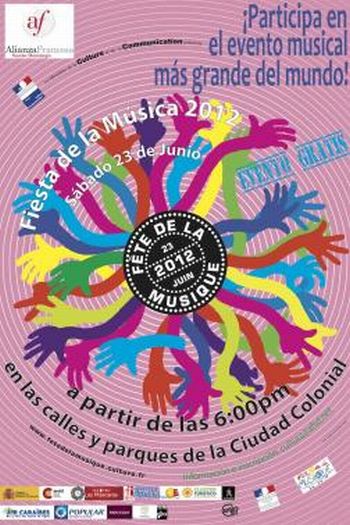 This year there will be 34 bands, including 24 professional groups, that have registered to participate. This means there will be more than 220 artists performing on six stages proposed between 5:30PM to 12 midnight. There will be over 40 concerts from which to choose.

The closing concert will take place at 10:30PM at the Spanish Cultural Center with Fred Deshayes Group. He is an author and composer who devotes his talents to writing music of traditional rhythms of Guadeloupe, Brasil and Africa.

There will be a flier schedule of events and happenings handed out and available at most of the venues. Make sure you have good walking shoes so you are comfortable walking from one show to the other. You do not want to miss out on all the music and fun.

I just got the schedule for the Festival of Music! It is a PDF file and will open in its own window. Don’t worry, they will still be available in the parks on the big day.

For more information and links to various sites about this World-Wide event, Fête de la Musique sponsored by the French Alliance of Santo Domingo you can see more on the Colonial Zone News Blog Festival of Music 2012