UPDATE: Just got conformation about the new dates for the festival. Since Tropical Storm Ernesto decided to pass by us the past weekend the festival was postponed. The new dates are August Saturday 11 and Sunday 12. They are now saying that the music will start at 7PM on both nights instead of the originally stated time of 6 (ending Saturday at 2 and Sunday at midnight). So we will be able to have our Festival del Merengue y Ritmos Caribeños. YEAH! Just hope that no new storm decides to visit us.

Festival del Merengue y Ritmos Caribeños/ Merengue Festival and Caribbean Rhythms commemorating the anniversary of the city of Santo Domingo sponsored by Brugal Rum and the Ministerio de Turismo/ Ministry of Tourism. The festival is free. 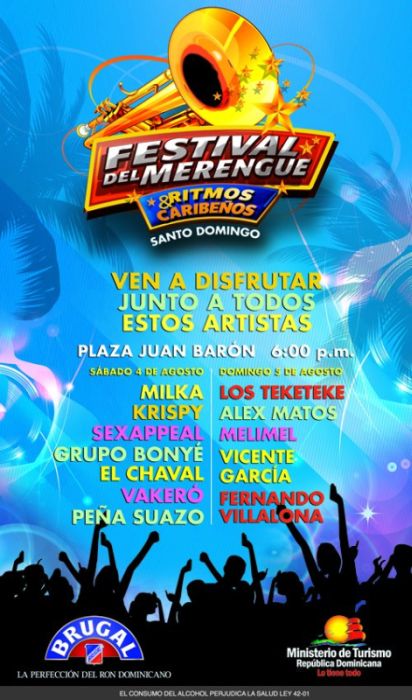 The Festival will be in August on Saturday 4 with the show running from 6PM to 2AM and Sunday 5 from 6PM to midnight.