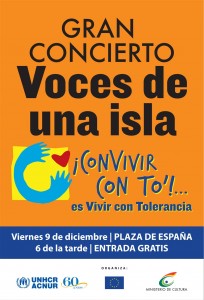 The concert is part of a major awareness campaign entitled – To Live with … is to live with tolerance/ Convivir con To’ es Vivir con Tolerancia. This campaign is to promote issues such as tolerance, coexistence, combating all forms of discrimination, prevention of gender violence, multiculturalism, solidarity and respect, and all aspects of human rights.