Burunganda is real and it is scary.

Known as the robbery and date rape drug, it is being used here in Dominican Republic and around the world.

The drug is usually in powder form and has the power to control and suppress a persons will and also can suppress their memory for a short period of time. The person can look and act normal while having no control over free will.

It causes a sort of hypnotic feeling giving the person who administered the drug control of the unsuspecting person. It is used in most cases to make a person do ones bidding. This way they can rob, abuse, make the person commit crimes or sex acts without them knowing why they are doing these things. The victim does not just goes along with what they are told to do and later they have no recollection (or the memory is very hazy) of doing what they did. Some people under the influence have had their bank accounts wiped out, their homes emptied and worse.

The drug can also be used for good. It is widely prescribed for motion sickness, nausea and vomiting. It is also used before some medical procedures surgeries. 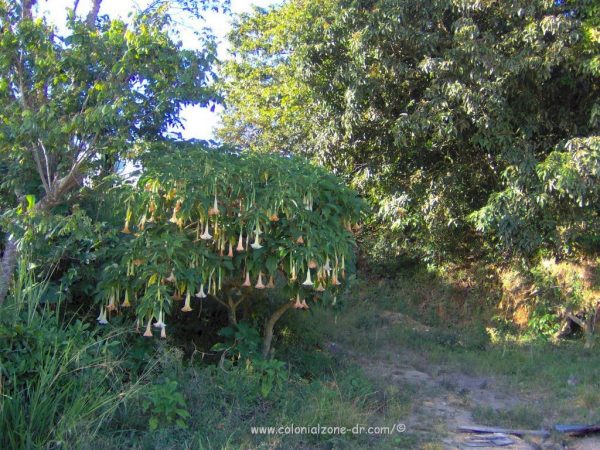 These are some of the names used for this drug that I found when doing a search. Devils Breath, Hierba del Diablo, Borrachero, Toloache, Scopolamine, escopolamina, Datura, Burundanga, Brugmansia, in Dominican street slang callejero. I am not going to write about where it comes from and all the medical information. If you want to learn more do a search.

I have heard about this drug before as the robbery date rape drug but never met anyone that it happened to until today.

A good friend of mine in Colonial Zone told me it happened to her last week. She was standing in the street, Calle Isabel la Catolica in Colonial Zone to be exact. A lady came up to her asking something that she did not understand. The lady was mumbling and needed help. My friend leaned in closer to try and hear the woman. Then a man came up and tried to help. That was all she remembered clearly.

She ended up telling her friends she had to go somewhere with a friend and she would explain later. She went with these people and took thousands of dollars out of the bank and gave it to them. No one knew where she was. A few hours later she called her family and told them where she was. She cleared out the bank account and didn’t even know it.

She said that she was so happy being with these people and that she felt that they were her good friends while she was doing their bidding. She did report it to the police. It ends up that this has happened a lot here the last few weeks. Even to a priest and other older women. They did catch the woman that did this to my friend. She is in prison right now along with a few others. Her accomplice, the man, ran away.

This group that did the robberies mentioned above are not Dominicans. 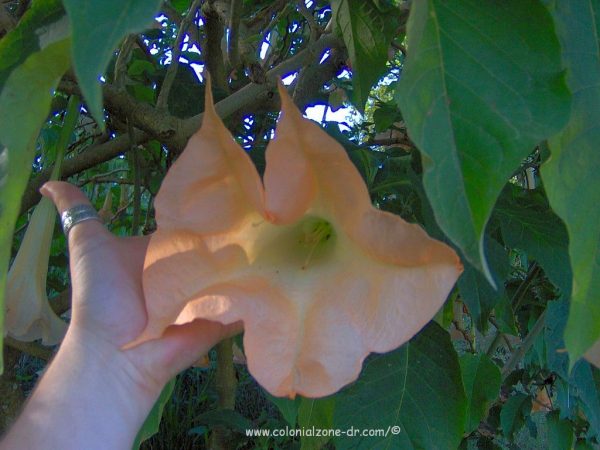 A Brugmansia (Angels-Trumpet) flower up close.

Burundanga is the drug of choice for criminals.

It temporarily alters brain functions in about 2 minutes.
It puts the victim is in a state of passivity and complacency.

The power can be distributed in many ways. It can be placed in candy, soda, liquor, perfume, paper, tickets, or rubbed on the skin. It can easily be added to your drink so do not leave your beverage unattended. Someone might show you something and there could be powder in it, like a newspaper, hankie or business card. It could be in spray form as well.

High doses cause convulsions, severe depression, coma and even death.

Suggestions On What To Do If Drugged

If you feel you have been drugged call for help fast! Fall on the floor and act like your dying. Run. Scream. Anything to bring attention to yourself. Get away from whomever you think might have done this before it is too late and you lose your inhibitions.

It can happen anyplace, not just here in Dominican Republic. I have heard stories about this drug being used in all parts of the world. So please be aware of your surroundings and use caution.

This documentary World’s Scariest Drug tells more about the drug.