Another update about the Earthquake that happened here in Dominican Republic early Thursday morning.

The epicenter was located in the area of ??the Bahía de Ocoa (Ocoa Bay), closer to Palmar de Ocoa. This geographical point belongs to the province of Azua, representing the extreme south, bordering the province Peravia.

A community of Peralta, Azua Province, called El Pinar was cut off not El Pinar de San José de Ocoa which was originally reported. These are to different places. the roads were cleared fast and traffic resumed as usual.

This video “Momentos del Temblor en Ocoa” is in Spanish but it shows some of the damage caused by the temblor de tierra as recorded by www.ocoaenred.com

More than 300 earthquakes with a magnitude between 2.0 and 4.5 degrees on the Richter scale occurred in Dominican Republic during 2011 plus an undetermined amount of microtremors that pose no danger and therefore are almost never reported.

At 10:30 pm on Thursday January 5th the Seismological Institute said it had UASD recorded 35 aftershocks. One of the strongest aftershocks occurred at 6:04 pm at San Jose de Ocoa, with a magnitude of 4.1 on the Richter scale without causing further damage.

The first preliminary evaluation conducted or the countries dams did not detect any cracks, sliding or debris on the walls of dams.

The Emergency Operations Center (COE) reported that at least 12 buildings in the San Jose de Ocoa area had cracks and cement falling because of the aftershock.

There were also rock slides that stopped traffic for a short time in the communities of El Pinar in Azua and another on the road Sánchez, in the street El Número.

It is reported that all is under control. 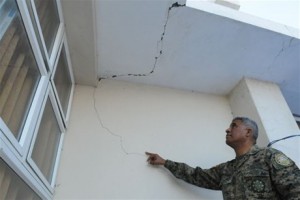