7 Days WIth The People / “7 días con el pueblo” started 40 years ago in the Palacio de los Deportes in Santo Domingo to show and promote the solidarity of the people in their democratic struggles. It was promoted by the union Enrique de León and the General Confederation of Workers / sindicalista Enrique de León y la Central General de Trabajadores (CGT). There were many national and international artists who participated in this historic concert that happened 40 years ago that united thousands of people. Nothing or no one prevented the people from lifting their voices, singing and shouting to the music as one. After this show of solidarity from the people Dr. Joaquín Balaguer slowed political repression and civil-military government and became more tolerant of public demonstrations. It was a new beginning.

The events for this 40th year celebration include talks, introduction of 2 new books, a concert with young artists, awards and an exhibition of photographs.

The concert “7 días con el pueblo” will conclude this memorial of the very important day on November 29, at 8PM, in Fortaleza Ozama, Calle las Damas, Ciudad Colonial, and it is free to the public. 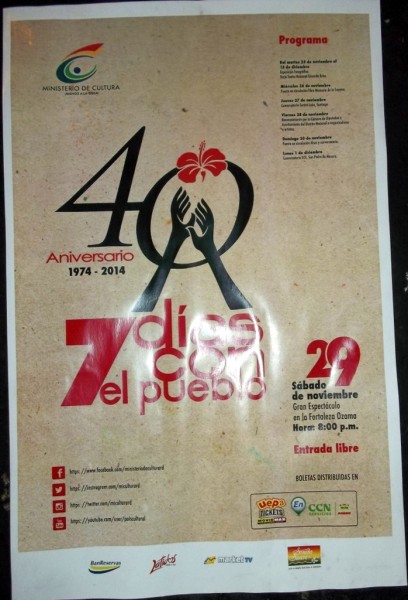 The concert “7 días con el pueblo” November 29, at 8PM, in Fortaleza Ozama and it is free to the public.

To see some pictures of the original event visit http://elcanero.blogspot.com/2014/11/siete-dias-con-el-puebloun-reencuentro.html